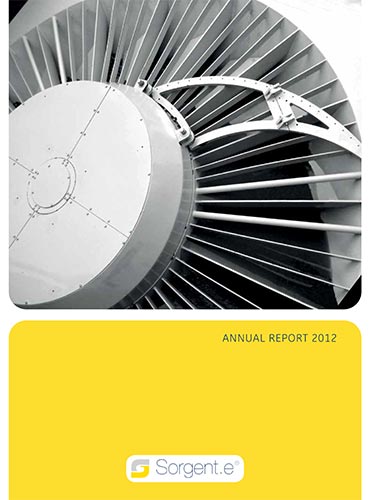 Despite the persistence of a serious crisis in a number of markets in which the Group operates; the consolidated revenues grew by 25% compared to the previous year, EBITDA has seen a 20% increase compared to 2011 and the net profit after tax has scored a +24%.

Among the most significant events of 2012 it should be noted the acquisition of control of the French company MJ2 Technologies s.a.s, incorporated in 2004 for industrial development and the production of an innovative hydroelectric turbogenerator for the exploitation of low and very low heads, called VLH Turbine (Very Low Head Turbine).

In addition, with the incorporation of Sorgent.e Hydro Canada Corporation began our structured presence in the Canadian market.

With reference to the international expansion we lastly the contribution that the new Joint Venture signed in Colombia with an important local utility will be able to give to the strengthening of the presence of Sorgent.e in the South American market both as an investor and EPC Contractor.

The team's work has also grown during the past year, in contrast to the general crisis that did not spare the energy sector. Sorgent.e today has over 200 direct employees around the world, with an average age of less than thirty-six.

Finally, a mention must, is the positive energy balance derived from direct production of plants directly owned by Sorgent.e, which allowed the service to 100,000 households and a total savings of more than 650 tons of CO2.