Opening of the Mariposas hydroelectric power plant in Chile 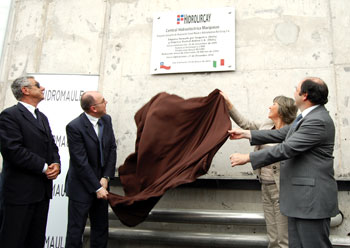 Ribbon-cutting ceremony today in Mariposas, Chile, for the second hydroelectric power plant executed in the Andean country by Sorgent.e. Present at the ceremony, together with Daniele Boscolo Meneguolo,  Managing Director of Sorgent.e, Rodrigo Alvarez Z. Minister of Energy in the Republic of Chile and Vincenzo Palladino, Italian ambassador in Chile.

The plant, having an installed power of about 6,5 MW, involved an investment of 20million of dollars through an operation of project financing developed by the SPV company Hidrolircay SA with local banks which financed the work at subsidized rate covered by the German KfW. The electromechanical part of the works has been carried out mainly by S.T.E. Energy, among the major Italian plant constructors at a worldwide level.

The plant, outstanding example of eco-compatible energy exploitation, will produce more than 40 million kWh of electric power, corresponding to the consumption of a city with 30.000 inhabitants and to a saved consumption of 18.000 oil drums; an energy production which avoids in a year the emission in the atmosphere of 20 thousand tons of  Carbon Dioxide (CO2).