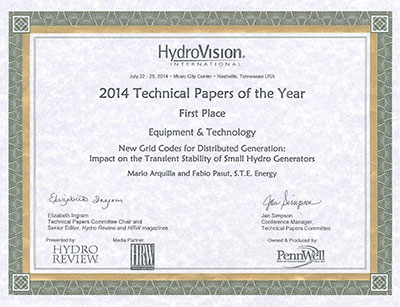 S.T.E. Energy has been awarded best technical paper within the “Equipment & Technology” section at Hydrovision 2014 Nashville (USA), International exposition of the hydroelectric sector considered a benchmark for the whole American continent.

The paper, written by Fabio Pasut - I&D manager and by Mario Arquilla - S.T.E. Energy’s President, and titled “New Grid Codes for Distributed Generation: Impact on the Transient Stability of small Hydro Generators”, is the result of one among the various I&D activities carried out by STE Energy within the field of Smart Grids.

The described scenario is above all that of developed countries, where, during the last ten years, there has been a sudden change within electrical grids, mainly due to the massive diffusion of small generators arbitrarily distributed across the territory, commonly grouped under the term DG (Distributed Generation).

Such rapid evolution imposes on legislators and the technicians of the sector an important effort for the adjustment of electrical infrastructures and some technical rules for the DG connection, within the challenging travel towards Smart Grids. 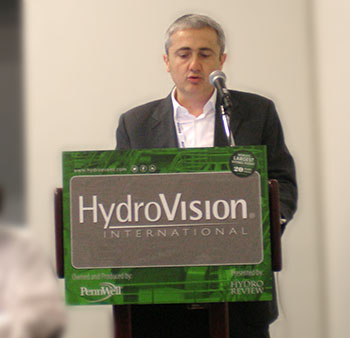 Within this context, S.T.E. Energy is working on the integration of DG within the existing electrical grids, analyzing the effects of the regulatory developments and proposing innovative solutions for the control of distributed generation.

The paper, presented towards an audience of 400 people coming from the international hydroelectric sector and assessed by a group of more than 3,000 people, investigates the consequences of specific regulatory adjustments already introduced by some European countries, with the aim of increasing the integration of distributed generation into electrical grids. The study makes clear how situations ofinstability can arise for rotating small generators directly connected to the medium voltage grids, which typically are of a hydroelectric kind.

Soon, S.T.E. Energy will bring the results of its own research to two International expositions, Hydro 2014 (Cernobbio (CO) Italy) where the topic discussed at Hydrovision  will be resumed and deepened and Vienna Hydro (November 26-28, 2014, Vienna) where a study titled “A novel MPPT controller for Variable Speed Hydro Generators” will be presented.