At the basis of the plant, the innovative VLH turbine allowing the exploitation of very low heads with the minimum environmental impact 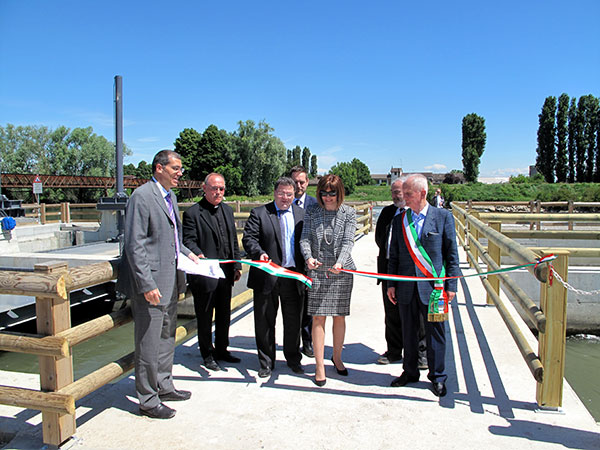 Cremona, May 17, 2014 – Sorgent.e, an International player which brings together more than 30 companies within the field of renewable energy, inaugurated a hydroelectric power plant in Isola Dovarese, Province of Cremona. The plant, with very low environmental impact, has been executed by IDEA Energia, a subsidiary company of Sorgent.e, and it also involves as a partner to the initiative FEN Energia, a company from Brescia operating within the field of renewable energies.

The new hydroelectric power plant ribbon cutting ceremony has taken place today at the presence of Carlo Malvezzi, Regional Councilor and Vice President of the IV Industry and Employment Commission of the Lombardy Region as well as of Luigi Fantini, Mayor of Isola Dovarese.

The Isola Dovarese hydroelectric power plant, which is placed on the Oglio river, inside the South Oglio regional national park, exploits the waterfall next to the old bridge, displaying a rated head of just 2,60 meters. The main feature of such plant is the use of 2 VLH 500 kW turbines which allow the operation with very low heads and, additionally, being submerged turbines, they support the construction of plants with reduced environmental impact.

Patented by the French company MJ2 Technologies sas, acquired in 2012 by Sorgent.e, the VLH turbine is the most advanced equipment, worldwide, within the hydroelectric sector of low heads. Its functionalities, in fact, permit to increase the plant’s performances and to reduce to the minimum the environmental impact. 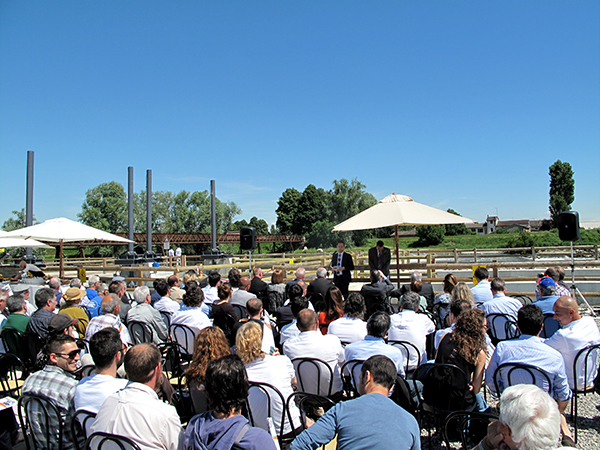 VLH turbine is the first “fish-friendly” turbo generator  all over the world, able to leave fishes migrate through its blades in operation. Moreover, being the VLH unit submerged, its visual and noise impact is minimum, thus making its implementation very easy in urban or naturalistic environments.

Moreover, VLH turbine is able to function with very low heads from 1.5 to 4.5 meters and it guarantees high efficiency levels thanks to the inclusion of direct coupling and variable speed generators, besides the fact of being able to function in a completely autonomous way without connection the electrical grid. To the advantages offered by the VLH turbine you can also add a significant reduction of civil works costs, given the fact that the quantity of concrete used is reduced and no external buildings are necessary.

The new Isola Dovarese plant will be able to produce between 5 and 6 million kWh every year, according to the availability of the water resource, thus responding to the needs of about    1.800 families and avoiding the emission to the atmosphere of about 3.500 tons of CO2.

STE Energy SpA executed all the electromechanical and automation works (turbines, generators, electrical panels and power transformers) and it will also provide the conservation and maintenance activities.

The Isola Dovarese plant is part of a wide renewable energy production system widespread within the Po’ Valley: just within the hydroelectric sector there are more than 20 plants executed by Sorgent.e in the area between the provinces of Mantua and Cremona.

“The opening ceremony of the Isola Dovarese hydropower plant – commented Daniele Boscolo Meneguolo, Sorgent.e’s CEO – demonstrates the commitment of Sorgent.e Group to the development of advanced solutions and technologies in order to improve a strongly growing sector within renewable energies such as mini hydro. Thanks to the use of an advanced technology such as VLH turbines, the Isola Dovarese plant is set to become a model for mini-hydro, real core business and, since the beginning, engine of development of the Sorgent.e Group, able to fully compete with any other kind of traditional plant to exploit water energy.”