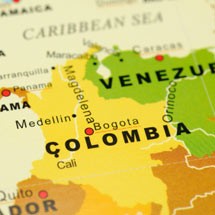 The foreign growth of the Sorgent.e group continues, and besides Chile, Perù, Equador and Costa Rica it looks with great interest to the Central and South American markets.

Within the past few days Sorgent.e closed an agreement in Colombia in order to create a joint venture with the local utility ISAGEAN in order to execute hydropower plants under 30 megawatt.

Such outstanding agreement is a reward for Sorgent.e’s skills and technological leadership within the mini-hydro, recognized and appreciated by the important Colombian company, among the leading hydroelectric producers within the country, thanks to its important “large” plants. Such Colombian company, relying on an expert partner, aims to extending its presence in such a new segment of the market in an economically profitable and paying way.

Colombia represents the third economy in Latin America with a 4.5% GDP growth in 2012 and an energy demand which has been constantly growing in the last ten years of an average 2,5% per year and that, thanks to the future execution of the Panama interconnection, will increase its chances of selling energy abroad.

The hydroelectric potential in the country is really high, just considering that 70% of the total installed capacity is given by hydroelectric energy and just 10% of it is made by plants with a total power lower than 20 MW.

“How to grow in a market in trouble? Trying to simplify, trying to have the best product, within the best market in the best moment”, the manager says. Easier said than done, looking at the conditions of the market. «Markets are moving with unpredictable speed, and this cuts out a number of companies” Mr Boscolo ends up saying. «Our own choice has since long been that of going international, diversifying sectors and heading to technological excellence”.